As a young woman in search of education and opportunity, Jean-Marie left her quiet home village of Guede Codji, Benin, for the bustling economic hub of Cotonou. Though fearful and uncertain of what the future would hold, she was desperate to escape a life of poverty. Like many other young Beninese flocking to Cotonou, she felt forced to trade in the familiarity of home and take a chance on the unknown.

Jean-Marie had no idea how her years in the city would change her life forever. It was there, amidst the concrete buildings and the endless mazes of shops and shacks, that she found love, meeting and marrying her husband. However, their union and youth were quickly tainted by devastating loss as Jean-Marie helplessly witnessed the death of every baby she bore. One after another they died, for reasons she could not understand. In a culture where fertility is prized and children are treasured, Jean-Marie felt her identity and her dreams slipping away.

Neighbours reached out to Jean-Marie in her isolation. They were Christians from a local Bible-believing church, and they broke through her despair with a message of hope. They shared the gospel of Jesus Christ with her, and the clarity of that truth stood in stark contrast to the murky superstitions and fears of voodoo that had marked her upbringing.

Jean-Marie surrendered her life to Christ, experiencing freedom and a power that eclipsed the tricks of witchcraft she had known before. No longer fearful, she devoted herself to prayer, and to her amazement, Jesus answered her pleas and worked miracles.

“After I accepted Christ into my life, things started changing. The children I gave birth to didn’t die. None of them! With Christ, I could feel peace in my life. I was not afraid anymore,” Jean-Marie says, reflecting on that time. “I understood that only Christ can free people. I stuck to Christ and decided that nothing in this world could separate me from Him.”

Unfortunately, Jean-Marie’s husband did not understand her commitment to Christ and it caused friction between them. Her marital problems worsened until she found herself retracing her steps; in 2002, she and her children moved back to Guede Codji to seek refuge.

Despite the years she had spent in the city, the village had always remained her home. In Guede Codji, people walked barefoot along the dirt paths, and the constant drone and choking smell of Cotonou’s traffic seemed to be a world away. Here, time moved slowly and very little had changed in Jean-Marie’s absence. The villagers still relied on a hand-dug well to draw their water—a polluted source which caused great distress among the people.

However, Jean-Marie was aware of a need greater than the poverty and sickness around her. She sensed an aching spiritual emptiness, and could feel the darkness of voodoo hanging over the people she loved. Since the moment she became a Christian, her heart burned with a desire to see her own people saved. For years she had been praying constantly that the light of Christ would shine here, and that a Bible-believing church would be planted.

As the months passed after her return, Jean-Marie persevered in her daily invocation, unsure of how God would respond. Little did she know, across the world the answer to her prayer was already being set in motion.

‘No such thing as a coincidence’

In the same year that Jean-Marie returned to Guede Codji, various currents in North America began to flow in the same direction.

Ambassador Joël W. Adechi, the permanent representative of Benin to the United Nations, had a timely dinner meeting with a leader from Campus Crusade for Christ International. Benin was in dire need of clean water, and the ambassador spoke about the hardship plaguing his country.

The plea for a water program eventually reached the former president of Campus Crusade for Christ Canada (now Power to Change), Marvin Kehler. Strangely, this was not the first person to raise the issue with him. Only weeks before, Marvin had received a call from Frank Rempel, a Canadian businessman specializing in farm equipment manufacturing. Frank had rebuilt an old drilling rig and wanted to donate it to help provide access to clean water in Africa.

While Marvin considered these requests, Frank hosted a tour of REM Manufacturing Ltd. in Saskatchewan for the Christian Embassy, a ministry of Power to Change. The tour was meant to showcase innovations in industry, and among the group of visiting leaders was the Benin ambassador to Canada, Francis Loko. When Ambassador Loko learned of Frank’s drilling machine, he immediately requested it be sent to Benin.

Marvin couldn’t help but be struck by the various pieces falling into place. It seemed that God had provided a drilling rig, and the machine was already earmarked for use in Benin. He contacted Global Aid Network (GAiN), a ministry partner that had recently conducted experimental well-drilling programs in China and India.

“We had talked often about getting our own machine and starting a verifiable drilling program,” recalls Bill Blaney, CEO of GAiN from 2003 to 2017. “We decided that Benin, based on the request by Ambassador Adechi, would be the place to go. Honestly, I’ve learned in my years with GAiN that there is no such thing as a coincidence. It is really God’s sovereign hand on His purposes and His plan.”

In 2004, GAiN signed an agreement with the Beninese government and the drilling rig arrived on the country’s shores. However, before the Water for Life Initiative could begin in earnest—and the JESUS Film Church Planting Strategy alongside it—local Beninese needed to be trained.

“We felt strongly, and still do as an organization, that people need to hear the gospel from their own people and in their own language,” Bill explains.

By 2005, the Beninese staff had been trained, adding to the tide of people God was using to minister in Benin. Finally, the program was poised for action. One of the first villages on GAiN’s list was Guede Codji.

In Benin, Jean-Marie continued to pray diligently, waiting upon the Lord to meet the physical and spiritual needs of her people. However, when the GAiN team arrived in Guede Codji promising a future well, they were met with skepticism. The people of the village had heard such promises before. Every election, politicians pledged to dig a new well, but after the votes were cast their commitments appeared to be forgotten.

When the GAiN team returned, this time with a drilling rig, the people took them seriously. In November 2005, the well was completed, providing the people with clean, disease-free water just before the onset of another long dry season. Impressed by fulfilled promises, community members were willing to listen to the message that the accompanying JESUS film team had to share. Plans were made to present the film in the centre of the village.

For everyone in Guede Codji, the changes that the GAiN team brought were a surprise. Help and hope had seemed to materialize out of the dusty landscape. Jean-Marie, however, immediately recognized them as answers to her years of prayer.

Beside the new well, villagers gathered for the presentation. In their own language, they heard the promise of living water to be found in Jesus Christ. When a Beninese pastor from a nearby village asked if anyone would like to become a Christian, many came forward. The next Sunday, the pastor led the new believers in a service under a tree. Right before Jean-Marie’s eyes, a church was born in her home village. 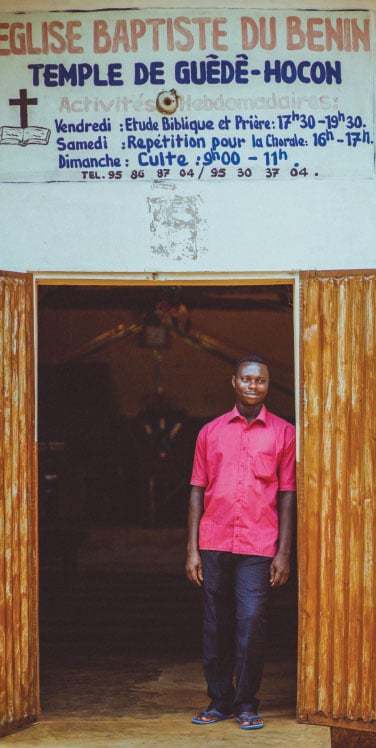 Basile Guede, the pastor of the church in Guede Codji, came to faith in Christ through the JESUS film showing in the village in 2005.

From its infancy, the new church faced various obstacles. Meeting regularly beneath a tree was not sustainable, the members quickly recognized, as the heat of the sun or a downpour of rain could interrupt them. Jean-Marie and the new believers prayerfully sought God’s direction for a meeting place, as well as a shepherd to guide their church community.

In response to the need, local Christians donated land and built a temporary shelter covered in palm branches. Pooling their resources, the church members also decided to send one of their own to receive training and return as a pastor for the area. Basile Guede, a young man who had received Christ after seeing the JESUS film, volunteered. With the financial support of the congregation, he left the village and attended seminary; when he returned three years later, he was equipped with the Biblical training needed to guide the church.

When JESUS film team members returned to the village to follow up on the church plant, they were happy to see that the gospel had firmly taken root. The commitment of the believers was evident, as was their need for a church building. Bringing in metal sheets and teak, GAiN helped build a more permanent structure. The Christians of Guede Codji were bolstered by the gift, and decided that they could add to what they had been given. Each member contributed, and the congregation was able to hire local craftsmen to build around the structure. A wall was erected and painted, putting the final touches on Eglise Baptiste du Benin.

“Christians from the church did not just stop at the number we were at the beginning, but we have tried to reach out to other people in the village,” Jean-Marie explains, standing in front of the church structure. “Today many of the people in Guede Codji village are worshipping God in this building, and even other people from outside this village come to worship in the same place. Praise God!”

The well in Guede Codji was the second well drilled in GAiN’s Water for Life Initiative. In February 2018, GAiN celebrated 1,000 wells in Benin, which provide clean water to approximately one million people in the country. To date, 379 Beninese churches have been planted through the JESUS Film Church Planting Strategy.

Looking back, GAiN team members can’t help but be amazed by the lives and circumstances that converged to bring the light of Christ to Guede Codji. Stirred by the prayers of Jean-Marie, equipped by the donation of Frank Rempel, and set into motion through a constellation of well-timed conversations, all the pieces came together to form a larger story.

“What this story shows to me is that God, first and foremost, listens to the prayers of the people. Secondly, He uses His servants to carry out His will,” says Bill. “There is no way to explain all this, except for one thing—and that is God’s sovereign hand on everything that occurred here. In the world that GAiN works in, this story is one of thousands happening every single day.”

As the humanitarian partner of Power to Change, Global Aid Network helps to reveal hope and restore life through relief and development initiatives for people living in crisis and injustice. Their mission is to demonstrate the love of God in word and deed.

As of April 2018, GAIN has provided a total of 1,757 water wells in Benin, Tanzania, Togo, Ethiopia, Southern Sudan, and Thailand. 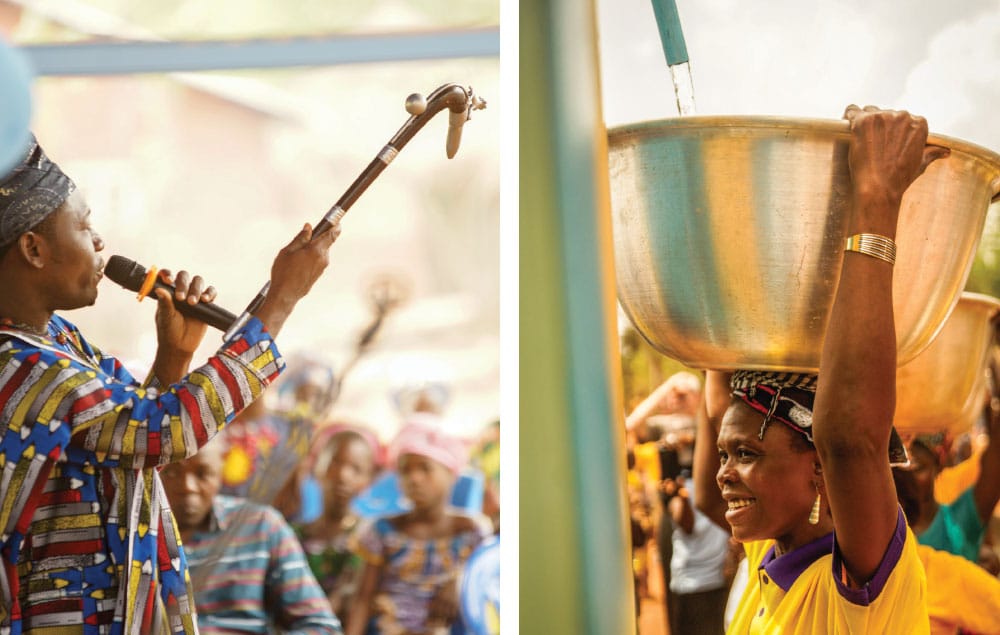 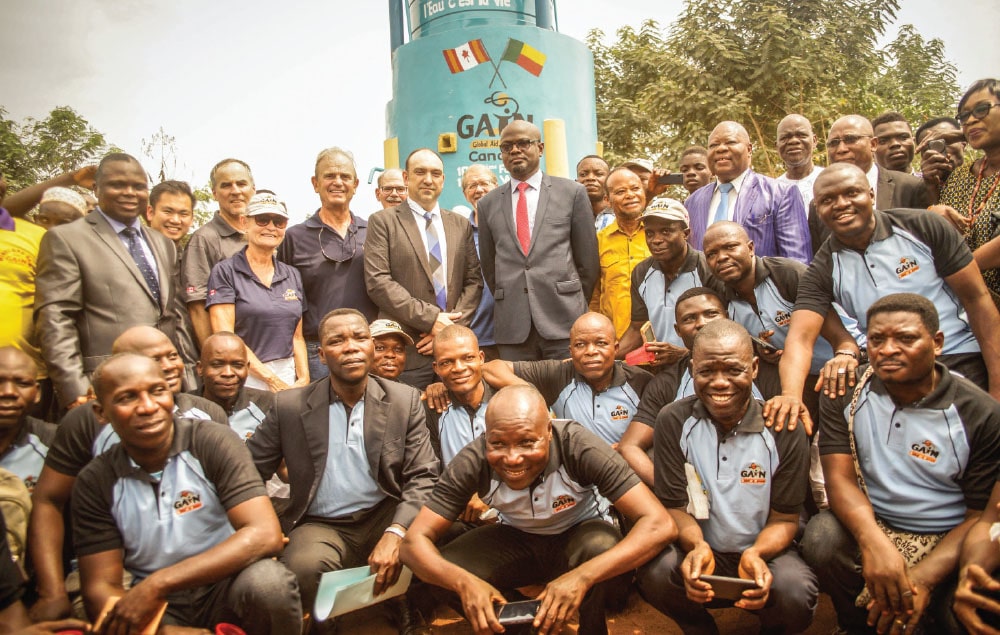 The GAiN Benin team pictured with Power to Change and GAiN leadership, and Seidou Adambi Samou, the Benin Minister for Water, Mines and Hydraulics. 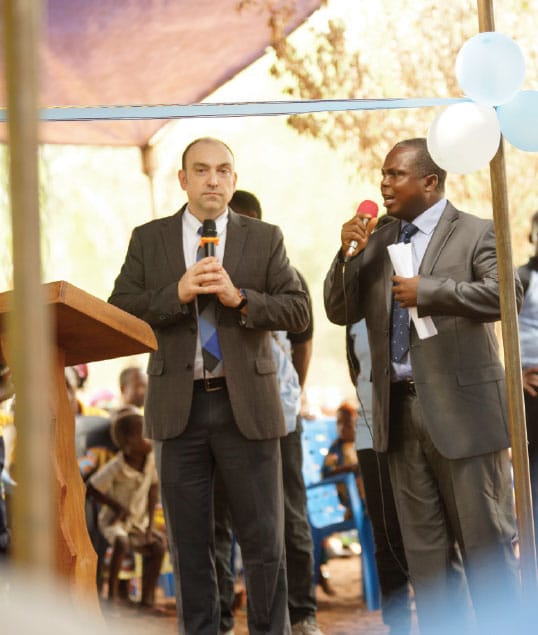 GAiN CEO, Ray Sawatsky, and GAiN’s Water for Life Initiative Manager for Benin, Patrice Lavagnon, share a word of encouragement with the people of Koudjinnada.

Faithfully Following: Fern Differences & Drift: Wisdom for the challenges every marriage will face Hollow Places Conflux If not now, WHEN? Ministry Question: WHEN
BACK TO THE MAGAZINE