I recently watched a video that was featured on the “trending” section of Youtube. The clip was titled, “Ricky Gervais and Stephen Go Head-to-Head on Religion”.

In it, Gervais, a popular atheist, and Stephen Colbert, a known Roman Catholic, explore the topic of belief in God. Gervais uses three objections to God’s existence. Each objection articulated a grievance you may have heard others use against theism, and more specifically Christianity.

At face value, the grievances that Gervais brings up might sound genuine–convincing even! However, I believe the source of many of his objections stem from a place of misunderstanding, more than it does a genuine attack on what the Christian worldview teaches concerning God. Many who use these types of complaints may be doing so honestly, feeling that these objections are convincing and persuasive. The issue is that although the balloon appears quite large, it’s actually full of hot air; going through these criticisms will help us understand why.

“Atheism” Gervais says, “is only the rejection that there isn’t a God–atheism isn’t a belief system.” However, the underlying problem with such a statement is it proves too much. By that description: my bed is an atheist, my neighbour’s cat is an atheist, and the bus I take everyday is an atheist. All of the things I mentioned do not possess a belief in a higher power of any stripe.

Many have objected to me claiming the bus is an atheist, stating the bus can’t believe in anything, never mind an omnipotent being. However, that is an entirely different claim. That assertion is a case of a lack of belief in God by something that is able to make a decision on a divine authority–and is a positive claim. Furthermore, it’s a claim that needs explanations to describe and quantify the external world around it. The simple “lack of belief” is confronted with a gap–it has to come up with explanations on the levels of epistemology, philosophy, metaphysicality…and lots of other big words we use to categorize things.

Atheism, as Gervais and others want to argue, is not a “worldview” (see more about worldviews in my article Is it OK to have an opinion?) that holds beliefs but simply a lack of a belief. This, however, ignores the fact that Gervais’ atheism leads to conclusions–he believes there is no God, and that belief has results that have practical implications. For example, the famous atheist Richard Dawkins’ belief in atheism led him to write his New York Times bestseller, The God Delusion. Thousands of atheists, Gervais included, were motivated by their comparable atheism to buy the book. Their belief in a worldview system, therefore, had implications–even minor actions like purchasing a book about said belief system.

Atheism certainly is a belief system. Its ownership as a qualifier to describe someone has many explanations for the world we live in. Yet, when we give atheists the benefit of the doubt and say Atheism is not a belief system, they’ve only told us what they don’t believe in. Of course, a follow up question could very easily be, “…then tell me what you do believe in, and we can talk about that”1.

2. “Have you investigated all religions?”

Gervais then states although Colbert believes in one God, “there are about three thousand to choose from.” This objection suggests if I lack knowledge on every religion, I am forced to conclude that any one particular religion within that large group is not true. But does that argument follow? I am not entirely sure it does.

For example, if someone comes to the conclusion based on thorough investigation of the evidence that Jesus claimed to be God, and that claim is true, one has excluded as an option all religions. For example:

Likewise, if one concludes based on evidence the universe had a definite beginning in the finite past, one has excluded the option of pantheistic religions, that assert the universe is eternal with no beginning or end.

We don’t, however, use this kind of reasoning in other instances, such as a murder investigation. A homicide detective does not need to investigate every individual in the city before he concludes a particular suspect committed the crime. Following, say, Martin Luther King Jr.’s assassination, the detectives did not investigate every person on the planet as potential suspects before concluding that James Earl Ray committed the assassination. Instead, the murder weapon–a Remington .30-60 hunting rifle was found on a sidewalk one block from the location. Descriptions from eyewitness reports of an individual fleeing the scene and fingerprints found on the weapon all implicated Ray. Police detectives studied the evidence they had and made a conclusion about the perpetrator–all based on the cumulative case pointing to James Earl Ray specifically.

When multiple independent lines of evidence cross paths on a given premise, other possibilities are excluded, and it becomes unnecessary to investigate every conceivable candidate/theory to reach a final judgement.

We should remain open to the possibility of misjudgment and new information, and be prepared to reevaluate conclusions. But we certainly do not need to investigate thousands (“three thousand to choose from,” as Gervais puts it) of competing worldviews and truth claims to conclude that Christianity makes sense.

Similarly, the claim that one has to investigate every religious worldview to assert any religious position backfires on the individual holding an agnostic or atheistic worldview. This renders drawing any worldview conclusions impossible–including atheistic claims.

Stephen Colbert does not need to study thousands of other religions to be rationally justified in affirming Christianity as true. Colbert simply needs to show that Christianity possesses sufficiently good evidence to warrant belief. Enough evidence to be confident in the truth claims it makes and holds.

These all create a cumulative case to reasonably conclude God’s existence, and that the Christian worldview gives the explanation as to who God is.

Immediately following his assertion that “there are about three thousand to choose from,” Gervais says, “you deny just one less God than I do, you don’t believe in 2,999 gods, and I don’t believe in just one more.” This objection though, implies that Colbert (or any monotheist) picks a god out of a hat, as if one worldview holds as much water as another. But this is not true–certainly not in my own case. I do not believe in just any god; I trust in the God of the Bible, whom I see firm evidence to believe in above other deities.

Likewise, there is a serious problem with Gervais’ argument. Using a similar analogy from objection #2, let us say you are called in to be a witness of a crime. The police officers ask you to stand behind a one-way mirror in which you see individuals standing against a wall. You recognize the individual who committed the crime and point him out.

The police officer scoffs at your pick, “You believe he committed the crime?” he says dismissively.

“Yes!” you say, “I have evidence that he did, as well as my testimony.”

“Well I don’t think anybody did it, I think it just appears that the crime happened,” the officer says. “I mean, think about it… There are seven billion potential criminals out there, and you believe that 6,999,999,999 of them didn’t commit the crime and he did? I just believe in one less criminal than you do!”

A common rebuttal from the skeptic, however, could be that this example is not an accurate comparison, “We know criminals exist, but we have no proof that any god(s) exist”. Yet, this objection stresses my point even more. In the example of the lined-up criminals, we know the skeptic is wrong–contrary to what he asserts, police officers do not pick one random suspect out of billions with each suspect being equally guilty. Instead, the suspects are chosen due to facts regarding their particular case. These facts and evidence make a cumulative case for the accused in question.

Thousands of false gods, or billions of innocent people, do not lead to the conclusion that there is no true God, or in the case of our criminal testimony analogy, no single guilty perpetrator. The God I believe in, I believe in because of the evidence. I do not believe in any god, but I believe in the God of the Bible, of whom there is firm evidence to believe in above other deities.

One of the biggest issues with Gervais’ talking points is they’re very witty. They’re simple, and at first glance sound rather persuasive. However, the problem with worldview statements reduced to Twitter-sized soundbites is that they limit nuance and depth.

Gervais’ responses aren’t merely wrong but can, unfortunately, promote shallow thinking. Belief systems must be taken seriously–whether we’re talking about atheism or Christianity. I hope that in addressing each of Gervais’ statements, I didn’t come across as mocking or belittling–that is certainly not my intention. And Christians should not fall into the trap of negative teasing or taunting when it comes to dialogue with professing atheists.

It is, however, important to challenge people and insist that evidence is provided for what is being said. Neglecting evidence-based thinking forces us into the adage coined by another famous atheist, Christopher Hitchens, who in his book God Is Not Great, said, “That which can be asserted without evidence can be dismissed without evidence.”4 This is true, not just for Christians, but also for atheists. Therefore, we should give statements from atheists like Gervais a lot of thought–to help us grow in how we explain our belief, as well as point out the emptiness of anything that is not the truth.

Of course, if you’re getting your theology, philosophy, and advice on worldviews from a comedian, it might not come by surprise when it turns out to be a joke.

1. See a more in-depth articulation of this argument in Andy Bannister’s. The Atheist Who Didn’t Exist: Or the Dreadful Consequences of Bad Arguments.

2. The Toledot Yeshu for example, is an early Rabbinical Jewish text composed between the 4th and 6th centuries, and goes to lengths to explain why Jesus’ divine claims were false and untrue. 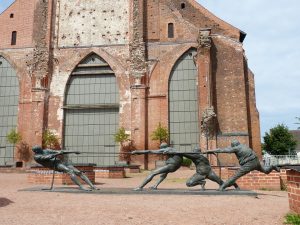