I have often wondered what it would be like to be an actor who has to play the role of a real ass. Like, not just someone annoying, but one who really embodies a thoroughly detestable individual. Think Kevin Spacey in House of Cards, or Bryan Cranston in Breaking Bad. How do they do it? What type of imaginative skill would they have to employ to totally get into character?

Do they go to the dictionary and look up all the opposites of pleasant, kind, and generous personality traits? Maybe you can think of a few more, but here are some I came up with.

That’s a good start I think.

Now, let’s take it to a whole other level of awkward and twistedness. Let’s imagine what it would be like to write the script for an actor that plays the part of a Christian advertiser who specializes in being successfully offensive in his witnessing.

Now the stage is set for our mental exercise: creating a good script for a badwitness. The following is what I imagine the character’s advice might be to a fellow Christian.

I love being totally right – all the time, and about everything too. I see myself as someone who holds the absolute correct perspective on politics, theology, religious practice, and even diet. I think I have the keys to help you effectively force, I mean share, your Christian beliefs with everybody around you.

Here are eight ironclad rules to ensure that you succeed in convincing any non-believing people who don’t already subscribe to your idea.

1. You need to remember, because you believe in the Bible, you are right and everybody else is wrong. Be assertive, aggressive, and don’t back down. Never concede. You can be confident and take pride knowing that you are right and those with different positions, even if off just slightly, are flat out wrong. Since you already have the truth market cornered, be bold about asserting your position! Don’t hold back.

2. You have nothing to learn from anybody. Why should you pay attention to what anyone else has to say, especially considering the mental dwarves to whom you are gifting your precious time and wisdom? Who do they think they are? Why aren’t they appreciative of you, given you are literally bending over backward to share with them your reasons for everything proper in religious practice and theory. I just walk away in those scenarios – they were likely predestined to be wrong anyway.

3. Don’t listen to anyone who opposes your views. Listening is utterly overrated. Why listen to other people who don’t have the truth? If they really were that smart, they would believe exactly what we do, right? Exposing yourself to opposing views will only taint your beliefs.

4. Don’t be soft in your approach to others. Tact is for emotionally incompetent people who just don’t get it. Truth is truth. The facts speak for themselves. If someone doesn’t accept what you have to say right away, there is no need to waste your time with pleasantries. All those whiney people who talk about emotional intelligence are just trying to sugar coat things.

5. Long-term plans for our witness are for losers. You know how some idiots are always yapping away about the importance of timing in presenting the gospel? That environment can be important to conversion? Garbage. Since the immediate need for conversion is RIGHT NOW, why would any person in their sane mind want to consider timing and context. What is up with the ridiculous phrasing, “prepare a heart for hearing the gospel”? How dumb. The bible – and I understand it in its totality, let’s not forget – says we are not to be ashamed of the gospel. Therefore, if you wait more than one millisecond to spread the gospel, you are a coward.

6. Someone’s culture is irrelevant. The bible is the bible and that is that. God never changes and neither should we. Don’t consider where people are at culturally. All cultures are the same. The message and our delivery needs to be the same. Mass marketing is the way to go. Keep it targeted to the general masses. Keep the message as impersonal as possible.

7. Continuously use Christianese. The best way to get someone familiar with our way of thinking is to use our Christian jargon on them – hard and heavy. We of the correct persuasion use Christianese because we are in the know, therefore everybody else should happily adopt and adapt, and that is that. Feel free to liberally scatter such words in your conversations: “blessed,” “fellowship,” “backslidden,” “chastity,” “soul winning,” “repentance,” “born again,” and ESPECIALLY “sinner.” As in anyone who doesn’t wholly accept everything WE have to say is just that – a sinner.

8. Don’t waste your time helping out people who don’t show any signs of being saved. Time is precious and there are souls out there that are ripe, so why in heaven’s name would you ever continue to act neighbourly to a pagan heathen destined for the bad place. What a waste of your limited resources. Better to use that time and attention for those who are agreeing to what you have to say.

Bonus tip: In addition to holding the most up-to-date biblical understanding, your political views are error-proof too. If you ever hear some whiney little schmuck say that sometimes a person’s political view is based on a different perspective, you know right away they are abject sinners and probably predestined to roast in the bad place for sure … just like the, well we know who they are.

Now depending on whether the above points prompt you to a fit of laughing or shaming despair, from personal experience, fear not! These points can, thankfully, be reverse engineered. For me personally they might be something like:

1. Just because I believe the Bible, it does not follow that I know everything – nor should I act like it. The bible is startlingly heavy on humility and grace as being integral for everybody.

2. I can always learn something, and it might even surprise me by who and from where. Even if you strongly and fundamentally disagree with someone on many important issues, they probably know a thing or two that you don’t. Don’t throw the baby out with the bathwater, as people apparently and bizarrely used to say.

3. I should always be listening – especially to those whose view I disagree with. G.K Chesterton, who C.S Lewis credits heavily for his conversion, always looked for common ground with those he was in discussion with.

4. I need to always be mindful of approach – to everybody, especially people I am trying to witness to. Everybody is different, and therefore everyone interprets, understands, and processes information differently. Know your audience.

5. Long term plans aren’t only useful, I should know that they are integral. No plant, no relationship, not even bad habits develop instantly, why should evangelism be any different? Sure, there are some cases of instant conversion, but viewing conversion as something that grows might be most helpful.

6. I am influenced by culture (family, nationality, and upbringing) so probably everybody else will be too. In fact, your interpretation of Christianity actually happens through an entirely different cultural lens than the one in which it was originally communicated. Yeah, Jesus wasn’t a blonde, blue eyed, super chiselled white dude. That’s culture talking.

7. I should be bilingual. I need to be learning to speak in the common tongue and use the words relevant to the culture of the people I am seeking to reach and relate to. Often times this means using a secular language.

8. I was commanded to be neighbourly and hospitable to everyone – people are not ‘opportunities’ or ‘targets’.If you view certain non-christians in the same way that a salesman views potential customers, that’s a problem. Love the person who outright rejects your faith just as much (if not more) than the person who’s on the cusp of believing.

And as for the final bonus tip, it would serve me well to look more into the lives of people like C.S Lewis, G.K. Chesterton, Dorothy Sayers, or our very own Canadian George Grant. They all thoroughly despised being caught up in a mere and treacherously rigid binary of left or right, democrat or republican, liberal or conservative. Instead, they focused on the humanity we share with everybody. What a world it would be if we all strove to do the same. 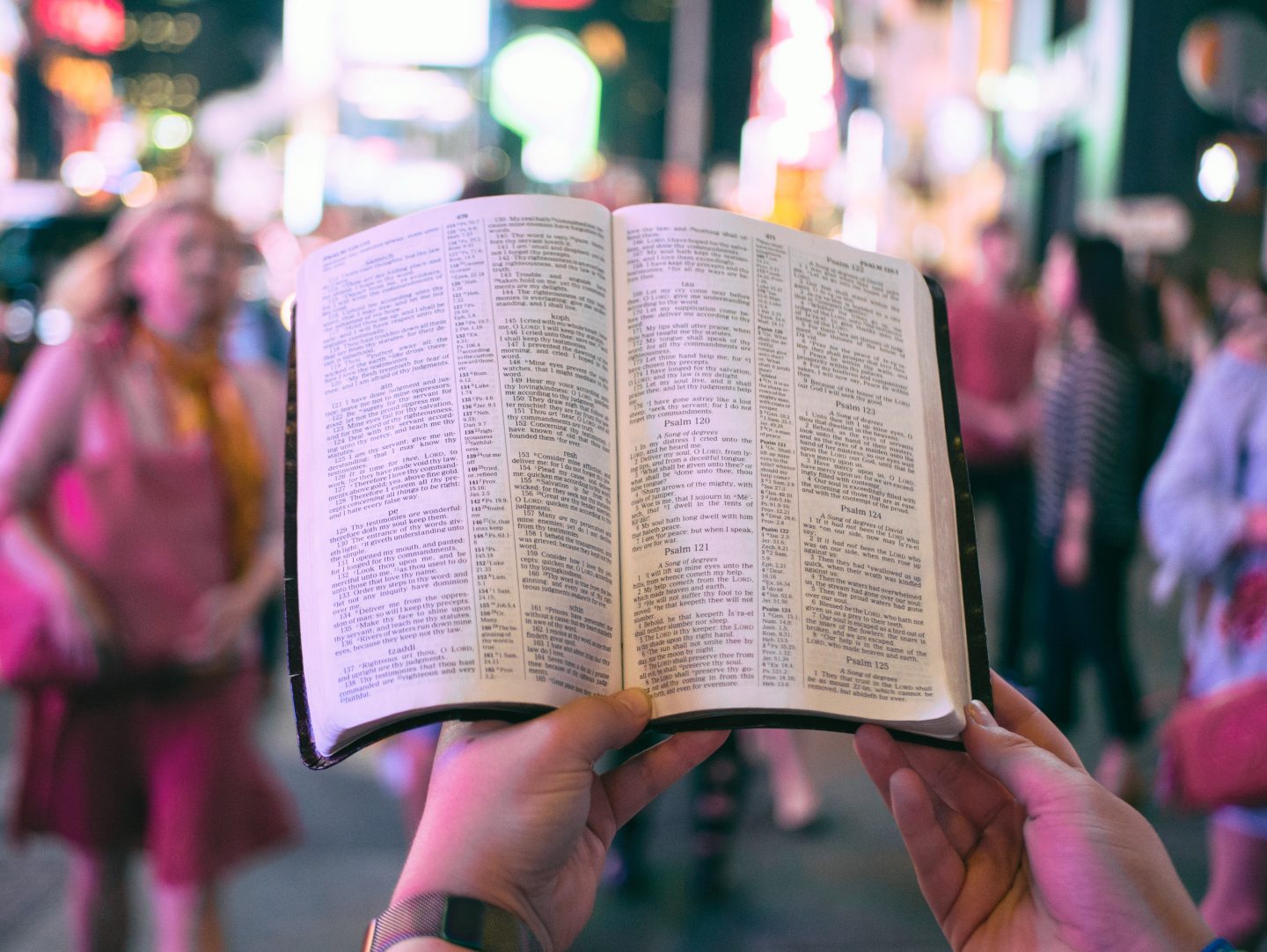 How to make sure your Bible doesn’t change you