When I consider what Indigenous people have gone through over the last 500 years, and as I read my Bible and reflect on God’s heart for all people groups, it makes me realize something: God wants to help society at large towards a better understanding of reconciliation. Which requires a better understanding of what we, as Indigenous people, have lost. One step towards this can be through the practice of land acknowledgements.

Then as I worked for an Indigenous organization for a few years, I was immersed in gaining new knowledge about these issues. I found out about all the chiefs and council members across the country that were in negotiations on behalf of their own people. Since those first conversations, and listening in on other conversations about land settlement agreements, I’ve sometimes had mixed emotions. I feel the pain of my own people’s despair and say to myself, “We’ll get it all back.” Yet, even though I’m Indigenous, I personally believe there is only a certain amount of land that can be regained. There’s been too much loss to recover it all.

The power of acknowledgement

When I attended the first Sixties Scoop Indigenous Society of Alberta conference in Saskatchewan a few years ago, the whole conference was about acknowledging that we as attendees were Sixties Scoop survivors. Each of us had different stories and different levels of pain. The most exciting aspect of the three-day event was at the end, when they had a special ceremony for us all. The drum group was pounding on the hand drum, symbolic of our heartbeat and what keeps us alive. Some of the people who organized the event slowly walked around the circle we were sitting in, and handed out some gifts to each of us.

As these two people went around the circle—and as the drummers were playing an honour song—they took a Pendleton blanket, wrapped it around each of us and said, “Welcome home.” Watching them go around the circle brought tears to my eyes, and I felt the same emotions of God’s presence as I’ve felt at any given church service. This was very powerful, and the reason why it was so powerful was because they publicly acknowledged that I was a Sixties Scoop survivor.

They took a Pendleton blanket, wrapped it around each of us and said, “Welcome home.”

Similarly, when there is a land acknowledgment statement given at the beginning of a public event of any kind, these words do make a difference. They can help non-Indigenous people realize that the land they’re currently standing on is connected with a particular tribal group. We are a people both connected to the land and our Creator. We are made in the image of God. And according to an Indigenous worldview we are also connected with nature, which is the land.

Reconnecting with the land and each other

As an Indigenous person who’s also a believer in Jesus, I see the practice of land acknowledgements as a good thing: they can help us reconnect with the land and each other. It’s one way to help Indigenous people feel that society acknowledges the land that we’re all presently living on.

Having a land acknowledgement statement at the beginning of celebrations, ceremonies, and special events also helps with the individual and collective healing process. As an article citing Wanda Nanibush, the first Indigenous curator at the Art Gallery of Ontario, explains,

“land acknowledgements have one goal, regardless of format: They commemorate Indigenous peoples’ principal kinship to the land—and the fact that we have not and cannot be erased from her, our collective first mother. ‘They’re a starting place to a change in how the land is seen and talked about…[They] help redefine how people place themselves in relation to First Peoples.’”

When land acknowledgment statements are made, it helps all of us to be more honest in our interactions with each other. It helps with the reconciliation process that has been ongoing for a number of years now. It helps our hearts and minds move toward healing, and move toward feelings of being worthy. Over the last 500 years our Indigenous identity and sense of worthiness has been taken away, and replaced with being subservient to the church and government, causing some of us to develop a victim mentality. Land acknowledgement statements are one of many actions that move all of us towards honesty, reconciliation, and worthiness.

Parry Stelter is originally from Alexander First Nation, which is part of Treaty Six Territory. He is also a doctoral candidate in contextual leadership. He is founder of Word of Hope Ministries. He lives in Stony Plain, AB with his family and is a member of Hope CRC. He believes God does his greatest work in and through the local church. 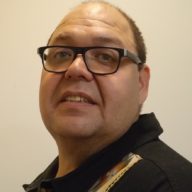 Parry Stelter is an Indigenous member of Alexander First Nation that is part of Treaty Six Territory. He’s a member of Hope Christian Reformed Church in Stony Plain, AB. He’s the founder of Word of Hope Ministries and Doctoral Candidate in Contextual Leadership through Providence Seminary and University. Visit his website at wordofhopeministries.ca.

Why land acknowledgements are important to P2C-Students

Land acknowledgements help me be human

How we can honour Indigenous students