The Tragedy of Time

[Editor’s Note: This is a work of creative fiction written through the P2C-S Writing Mentorship. While not explicitly “Christian” in content, Christians have long valued the deep questions that this story invites. We encourage you to read with an openness for how this story might “read” you—and say something about time, freedom, and life before death.]

The coroner was surprisingly easy to talk to.

He had inconveniently arrived at my house, earlier than the doctor, to transport my husband’s body. So I made him a cup of tea and invited him to sit on our couch. Maybe he was silent because he was waiting for me to snap out of a state of shock. Or maybe he doesn’t prefer to talk to the living. Either way, I needed to figure out how to distract the man’s attention away from the tools that had served as my accomplice.

“Would you like to see him?” I was eager to break his silence.

Technically, we were supposed to wait for the doctor. He shook his head no while fidgeting with his watch, revealing his Lifespan. 18982 days left to live. Not bad.

To my horror, his eyes started to trail towards a screwdriver on the floor in front of my bedroom.  I must have dropped it while I was rushing to clean. “So what’s your Lifespan?” I needed to draw his focus onto something else.

The coroner squirmed in his seat. It was an extremely private subject that no one dared to speak about publicly.

Like me. I resisted the urge to roll my eyes at his smirk. I kept the conversation going.

“So tragic.  I wonder how our watches can predict our Lifespans. The more I think about it, the less it makes sense!” I leaned forward a little and whispered, “I heard that some people’s Lifespans are glitching, do you believe it?”

I held my breath, unsure of how he would react. This is it, isn’t it? Years ago, my mother had humorously predicted an arrest in my future. To my relief, he finally answered, leaning towards me. “I shouldn’t say this, but . . . there was one woman who died a day earlier than she was supposed to. The doc and I couldn’t make sense of it, but then . . .”

A few more moments of the most agonizing silence went by, and I still didn’t know what he was going to say. I also didn’t know how else to fill the quiet, so I surprised both of us by casually stating, “I killed him.”

He choked on his chamomile tea, his eyes glancing towards his cup then fixating on mine. He opened his mouth to respond, my satisfaction on the brink, when the doorbell rang.

“Saved by the bell,” I congratulated him, while moving towards the door.

“Ms. Sylvana Green?”  Unlike the coroner, the doctor was right on time. We all moved towards my bedroom where his lifeless body lay. “How long ago would you say your husband passed?” the doctor asked.

Before I could respond, the coroner’s haunted demeanor cracked. “She killed him! She killed her husband!”

And that is when my state of shock broke, and I knew that he was right. My grief slowly started to consume me as the doctor angrily turned to the coroner and whispered, no doubt condemning his outburst and explaining my husband’s cancer.

My thoughts began to spin and I remembered when I first met my husband. “So what’s your Lifespan?” I couldn’t tell if the stranger behind me was crazy, rude, or just bold. He didn’t seem to care what I thought about him.

“You know you’re not supposed to ask people that question, right?” No one had ever asked me this, and I found it hilarious. I stepped towards the kiosk to purchase my subway ticket.

“Well, why not? Every little thing we do revolves around our Lifespan anyway, might as well talk about it.” He approached the kiosk next to mine.

He was right, and I really wanted to talk about it. I looked around to see if anyone was within hearing distance. “1400 . . . I know it’s low, try not to pity me.” I turned my face away, I wasn’t sure I wanted to know his reaction anymore.  I tucked my ticket into my wallet and I turned to say goodbye.

At 608, his cancer was gone. Maybe his watch was wrong somehow?

At 45, it made a reappearance.

I tried to rewind his watch with any tool I could find, hoping to change his fate by giving him more days, and even though there was a low chance it would work, it seemed harmless, and I was too desperate to do nothing.

Just as I was about to give up, I managed to add 100 days! I laughed for the first time in a while, amazed at what I had just accomplished. 100? That was over three months. I had beaten time!

“Sorry, Doctor, what was your question?”

“Your husband’s medical files say his Lifespan doesn’t end for another 30 days.”

Almost as soon as they were gone, I checked my own watch. It’s been zero for the past 24 days. And had I not been grieving, I would have realized just how much freedom time steals when, right at the beginning, you are consumed by the end. 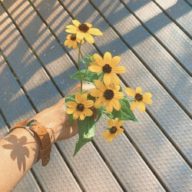 Jocelyn, aka Twin A, enjoys reading, writing, and daily adventures. Often mistaken for Twin B.

Who am I really? From Syria to Lebanon to Canada