What is global missions? And why does it matter?

[Editor’s note: P2C-Students offers opportunities for young adults to go on mission trips nationally and internationally. We want all people to experience God’s heart for the world. This blog series is one way to discover more about the what, how, and why of #globalmissions.]

I once read about a seminary professor who was asked at a boarding gate what he did for a living. “I teach missiology,” he answered, but the boarding agent didn’t have a clue what that was. The professor replied, “Oh, it’s the science of launching missiles.” Despite being in an airport, his joking answer almost seems less controversial than what missiology really is: the study of Christian missions.

When my non-believing friends hear that I study Christian missions, it’s just so weird to them. Not only is the concept of prosetylizing offensive in a relativistic, pluralist society, but its story has also been marred with evil, in the form of colonialism, greed, racism, hypocrisy, petty rivalry, cultural genocide, and other abuses of power. We must learn to recognize and lament these shameful chapters of Christianity’s history.

But these—dare I say, even these—cannot cancel the need, beauty, or aim of global missions.

At risk of sounding overly simplistic, just like there are good pastors and bad pastors, good churches and bad churches, there are also good and bad missions initiatives; deplorable missionary efforts do not mean exemplary ones did or do not exist.

In light of global missions’ bad rep, I think it’s all the more critical for us to recover what is right, good, and worthy about missions: what it really is, why it’s a big deal, and what it has looked like.

What is global missions?

I once heard that “two-thirds of God is Go” (not bad as quips go). Mission comes from a Latin word that means “to send”; it’s a theological concept, not a word actually found in Scripture.

Fun fact: until the 15th century, the word missio was used entirely to speak of something that God is, not something Christians do! Before mission was ever the activity of the church, it was understood as a divine attribute.

Theologian Paul Stevens speaks of this divine attribute—often called missio Dei—as “God’s own going forth… He is Sender, Sent, and Sending.” [1]

Notice how all three members of the Trinity are involved:

The Father is the first missionary, who goes out of himself in creating the world and sending the Son for our salvation. The Son is the second missionary, who redeems humanity and all creation through his life, death, resurrection and exaltation. The Holy Spirit is the third missionary, who creates and empowers the church, the fourth missionary, to go into the world. [2]

We see in Scripture an outgoing God who relentlessly pursues humankind in love since they turned away from him. Mission is an “outward movement beginning in God himself, a divine sending, an eternal trinitarian going.” [3]

According to missiologist David Bosch, if God is a “fountain of sending love,” then missions is about participating “in the movement of God’s love toward people.” [4]

Perhaps a more classic, textbook definition of missions would be “the task of reaching people for Christ by crossing cultural boundaries.” [5]

In short, global missions is what Christians do when they become imitators of God: it’s when the church joins God in his outgoing, redemptive, holistic work toward all people on every square inch of our planet—that includes both embodying and speaking about God’s kingdom, globally and locally. Missions is our part to play in the larger story of God’s work of reconciling creation to himself once and for all.

Why does global missions matter?

Why do Christians care so much about global missions? Here, we could respond from different angles.

The first has to do with God’s glory. John Piper captures this reason well with his famous quotation: “Missions exists because worship doesn’t.” In Christ, fully alive human beings can bring glory to God as they celebrate his goodness and beauty (i.e. worship), and since Christians care about God, they care about his fame as well (Habakkuk 2:14).

Another angle centres on Jesus, especially in his compassion for the lost (Mark 6:34). He proclaimed the good news and healed the sick as a sign of his kingdom. His life, death, and resurrection was part of his rescue mission on earth for us. As he was sent from the Father, he sent out his disciples (Matthew 10:1-20; Luke 10:1-20; Acts 1:3-8).

Simply stated, Christians care about global missions because Jesus cared. In addition to this, he also commands us to help people in all places and cultures follow Jesus too; each account of Jesus’ life ends with a call to missions. Jesus even sent us the Holy Spirit so we would be empowered to go.

Finally, Christians care because missions is their raison d’être. In the unfolding story of Scripture, God sets apart a man called Abraham so that through him all the families of the earth might be blessed (Genesis 12:3). This is one of the reasons why Israel became a nation in the first place: to demonstrate shalom (peace, harmony, flourishing) in a surrounding violent, corrupt and unjust world.

In the New Testament, the church is sent by Jesus to be his witnesses and reconciling agents for all nations. It’s not that the church merely has a mission, but that the mission has a church. [6]

Historically, Christians have participated in global missions in many, many ways. Here are just a few examples—notice the diversity of these missionaries and the diversity of their actions, which in different contexts have helped people see God’s reconciling love for them.

These examples are taken from a bunch of different sources, but most notably the books Christianity Encountering World Religions and Encountering The History of Christian Missions, and the websites Urbana Student Missions Conference and the Lausanne Movement.

And much, much more! I would encourage you to look up some of these names—their stories are inspiring, and they’ll give you a rich taste of what missional work can be.

If you are a Christian, I want you to know that you are part of something much bigger than yourself. Not only are you a Christian today because of past global missions, but you also have a role to play in the ongoing story of the gospel’s spread on earth, whether you cross an entire ocean or just the street.

How might God be inviting you to take a next step with him in his mission to bring all people to himself?

[2, 3] Stephen Seamands, Ministry in the Image of God: The Trinitarian Shape of Christian Service. 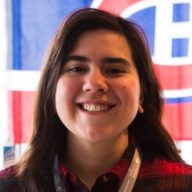 Originally from Laval, Élizabeth lives in Montreal, where she leads the francophone P2C-Students ministry (P2C-Étudiants). She’s also a master’s student at Fuller Theological Seminary, and she owns way more books than any one person should. She’s happiest when she’s enjoying a good cup of coffee (or a good story) with a good friend.

The Great Commission: an invitation and command

God, what in the world are you doing?

5 ways to get involved in global missions