Timing, coherency, and embarrassment are three historiographical methods of determining the reliability of a document’s content. In this episode, Jon uses these methods to help us study the history of the New Testament.

Hello, I’m Jon Topping and you’re listening to the Ultimate Questions podcast.
In the last episode, we looked at the textual reliability of the New Testament, showing that the book that we hold in our hand is an accurate and reliable version of what the original authors wrote. However, as I said in closing last time, that doesn’t necessarily mean that the CONTENT is reliable. Let me explain by giving an example. The Odyssey, by Homer, tells amazing stories of gods and goddess, and fighting beasts like the cyclops. Now, even if we were to show definitively that the Odyssey is textually reliable, meaning, that the text we have in our hands is an accurate copy of the original written by Homer, and that the text lines up perfectly, that does not then infer that the battle with the cyclops is a literal historical event. Just because the text itself is an accurate representation of what Homer wrote, does not mean that what Homer wrote was an accurate representation of historical events. What Homer wrote was clearly mythology. So then the question arises, how do we investigate whether a text is historical reliable? If we have a textually accurate version of the New Testament, how do we test the historical claims made in it, to see whether the events described actually literally happened as real moments in history? The way we go about doing this is by historiography, which basically means the study of history.

No presuppositions
Now before we start going into how we can evaluate the truth or falsity of the historical claims in the New Testament, I think it’s important to explain something first, as to how we treat the New Testament in these sorts of discussions.
For the purpose of evaluating the New Testament critically, we do NOT bring to the table the assumption that the New Testament is the inspired Word of God. Now let me clarify that, because when I’ve said this before I’ve gotten jumped on. I am not saying that we should not ourselves believe that the New Testament is the inspired Word of God, because it definitely is! I 100% believe the Old and New Testaments are the inspired Word of God, and I think you should believe that too. However, when we critically examine the text, we don’t bring that assumption, and here’s why. If you are talking to a non-Christian, and you assume the Bible is inspired, but they don’t, you’re already talking past each other. Non-Christians don’t respect the Bible at all, even more so they don’t think of it as actually being a case of God inspiring the writers. So we need to come at the issue where they’re at. At the very basic level, no one can deny that the New Testament is an ancient book, written in the first century, that makes historical and religious claims. That much cannot be disputed, so the non-Christian has to come to the discussion at least accepting that. If we want the person to accept that the Bible is inspired, we don’t just assert it and tell them, “you better believe this, because I said so!” We need to show that that this is something WORTH believing. So to begin that process, we treat the Bible like any other ancient text making historical claims, and we evaluate whether we have good reasons to think that these claims are true.
The methodology of evaluating the claims of a text is called historiography, which as I said, is just the study of history. We’re going to be looking at a bunch of these historiographical methods, and see how they impact different aspects of the New Testament. There’s quite a few of these, so we’ll go through a few in each episode, over the course of the next few episodes. For today, we’re going to be looking at early reports, embarrassment, and coherence.

Early Reports
First up, we’ll be looking at the historiographical method of how early the reports are. Now we already dealt with this somewhat in the last episode of the podcast, so I won’t belabor this point, but basically, the earlier the reports are, then, generally speaking, more reliable they are.
So for example, if you wanted to learn about Alexander the Great, there are a few ancient documents that give accounts you would study. In terms of early accounts, Diodorus would be the earliest, because his writings came only about 300 years after the events they describe, where Arrian’s works come about 500 years after the events. So in terms of this method, Diodorus would get more reliability points that Arrian would.
Now these methods that we’re using all pile onto each other. So just because something is early doesn’t mean it MUST be reliable, and just because it’s late doesn’t mean it CAN’T be reliable. It’s just that, if a document is earlier, its reliability of describing things accurately goes up.
So for example, with Arrian and Diodorus, Diodorus’ writing about Alexander get points for being earlier than Arrian’s, but Arrian’s is still considered more reliable, but for other reasons. So even though the earlier accounts show the text to be more reliable, there are other methods too.

Coherence
Another one of the methods used in historiography to check the accuracy of historical claims in a text is called coherence. This is a fairly straightforward one. If we have an account we’re evaluating, and the text looks similar to other stories in regards to the details, then it seems likely that both are true, because they “cohere” with each other. What this means is that the stories do not disagree with each other, in fact, they look like they could easily both be true. On the other hand, if you get a few different accounts of some event, and they all disagree with each other, then we would say the accounts are NOT cohering with each other, so there’s some problem going on. So in terms of coherence, if you end up getting multiple stories, all of which slightly blend together at parts, repeat the same stories at times, and gives details that all cohere with each other, then it looks like you’re getting an accurate account of these historical events.
For example, suppose you were the police officer reporting to an incident that occurred at a bar, where someone was stabbed, and you started taking testimonies from the different people that were present. If you interview a handful of people, and all of them give different explanations of which song was playing at the time, or who was on the dance floor, or who had x amount of drinks, or whatever, and all their stories differed, but, when you ask about the assailant, all of the eyewitnesses say the exact same thing, describing it in the same way, then their stories cohere with each other, and it seems likely that this part of the story is accurate. This is why officers will separate the eyewitnesses, and get their stories individually. If you get a group of people together, and they collectively tell the story, of course it’s going to cohere. However, if you separate them, each of them has to recall each detail on their own, so the odds of incoherence go up. If you find that the stories all cohere, even when separating them, then the reliability of the testimonies go up.
As an example of this from the New Testament, the best case of this is with the four Gospel accounts. Here, we have four biographies of the life of Jesus by four different authors, and all four of them were written at different times, and in different places. They aren’t perfectly similar, and in fact, it would be odd if they were perfectly similar. Actually, if we find that a story uses the exact same wording, then it looks as though this is done deliberately, and that one is copying the other. In terms of a police investigation, if the witnesses all use the exact same wording, and tell the story in the EXACT same way, that gives the police reason to be suspicious. We should expect the accounts to be slightly different, although keeping the details the same, because the different authors will tell the stories from their relative perspectives. It really looks like each of the four Gospels is attempting to explain the story from their own view point. That said, all of the stories cohere with each other. Even though they don’t always contain the exact same information, and sometimes one Gospel will include stories that others don’t, the general story of the life of Jesus looks quite coherent among the four Gospels.
We don’t find examples of stories that directly contradict each other, or make us think one or the other accounts must be false. Instead, it could very easily be the case that all four of these stories are accurate. So, based on coherence, because we have four different accounts, written by four different authors at different times and different places, and yet, all four of the accounts cohere with each other, that gives us added reason to think the four Gospel accounts are reliable.
Additionally, if we look specifically at the account of the resurrection of Jesus, all the explanations that we see cohere, and could all be true at the same time, which means we have added reason to think these stories are accurate. If the resurrection were a case of the disciples making up a story, it would be odd if all of them were able to tell the exact same lies. You would think, if they were lying and making up a story, that their details wouldn’t cohere with each other. Because all the accounts of the resurrection do cohere, that gives us added reason to think the resurrection accounts are reliable and accurate. Additionally, we find little nuances and slight differences in how the stories are told, which gives us added reason to think the stories are their own eyewitness testimonies, and then, these stories all cohere with each other.
Now there is one problem here with coherence, and that’s when people try to point out contradictions within the Gospels. The goal in pointing out contradictions is to show that the stories don’t cohere, so that would take away reliability from the four accounts. We will be going into the different claims of contradictions in a later podcast, just because, that issue deserves to be properly dealt with, and we just don’t have time to do everything in one podcast.

And on that note, this episode is coming to a close. Next time we’ll be jumping into a few more of these historiographical methods. We’ll be looking at enemy attestation, Aramaic substrata, and independent sources. This next episode will likely be a bit more difficult.
So I hope you’ll join me next time, on the Ultimate Questions podcast, from Power to Change – Students.

Have a question about what you heard?
Subscribe to Ultimate Questions (Moved!) 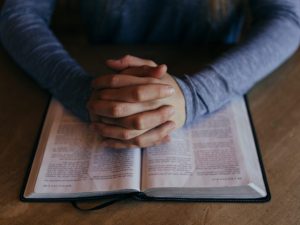