I met a student at Mount Royal University not too long ago who told me he doesn’t think God should be publicly discussed. Curious, I asked why, but he didn’t really give me an answer (“I don’t know”). Many people feel this way, saying that God and religion are private, personal matters, and that people should just believe whatever they want to believe and leave everybody else alone. But is this true?

Is it true that God and religion are only issues of personal belief which should never be discussed in public?

In fact, the opposite is true. The belief that God should not be discussed publicly may prove to be one of the most harmful and dangerous beliefs of modern times. The belief that discussions of God don’t matter or are irrelevant to one’s life is even worse.

For anyone who truly cares about truth (or their life), God should be one of the most talked about topics in the world. Why? Because if God exists, his existence affects your life. You don’t really get to choose whether it affects your life. It affects your life. It could mean anything from “You have a very specific purpose which you are missing the point of” to “Your eternal destiny hangs in the balance based on what you believe or do.”

Over the past several months, we have looked at many different lines of evidence supporting the validity and historical accuracy of the Bible, as well as responding to several common objections. We’ve looked at corresponding archaeological evidence, claims of accurately predicting future events, the reliability of the texts we have today, the trustworthiness of the witnesses to Jesus’ life and the evidence supporting the historicity of his resurrection. After all of this, it seems clear that at the very least, the Bible’s claims deserve some genuine personal investigation by anyone who cares about…well, anything. If there is substantial evidence pointing to the fact that the Bible could actually be reliable and true, then there is a lot at stake. If there is evidence pointing to the truth of some other worldview like Islam or Buddhism, then there is a lot at stake. If none of the above are true, but a supernatural Creator exists, there is a lot at stake. C.S. Lewis rightly pointed out that “Christianity, if false, is of no importance, and if true, of infinite importance. The only thing it cannot be is moderately important.” The same could be said of many other beliefs.

All of these worldviews, Christianity included, make strong claims about our existence, our purpose, our problem(s), our moral choices, our outlook on life, our fulfillment, and ultimately our eternal destiny. To hold an attitude of indifference or neutrality towards the topics of what is true about reality, whether God exists, and how he affects our lives is simply foolish for us because even if we don’t think we care now, we will care one day. The only way we won’t is if there really is nothing after death. For example, if I knew there was a strong possibility, even a likelihood, that I could have cancer, then it would be extremely foolish for me not to investigate that possibility. Though I may not care right now, once it starts affecting me, I will. Future me will not be thanking present me for my indifference on the matter. However, even if that isn’t enough motivation for me, what about my family? My friends? How will they be affected by my apathy? I should care about my own life, even if my motivations are purely selfish, but I should also care about how not caring now could affect my loved ones later. They might call me selfish for not caring about how my possible cancer and potential subsequent death affects them.

Now, let’s apply this example to the spiritual realm. If I die from cancer because I didn’t bother to seek a diagnosis and treatment, that’s one thing. If I die from cancer and it turns out there is a God, a heaven and a hell, and I spend the rest of my eternity in hell because I didn’t bother to investigate what’s true and how it affects my life, am I not similarly foolish? Am I also not similarly selfish for not caring about how my family and friends and loved ones could be affected by the potential truth of Christianity, or any other worldview? Not only could I be passively choosing my eternal destiny, I could be passively choosing it for everyone I care about too. Because I didn’t care enough to investigate. Because I didn’t care enough to want to know for their sake, let alone my own.

Sure, it’s easier to focus on the here and now. Sure, it’s simpler to just “go with the flow” through life. Sure, we have school and jobs and family and significant others to concern ourselves with. But if eternity is real, this life is almost meaningless by comparison. As hard as it is to imagine, what comes after this life could actually matter far more than what’s immediately in front of you. Think of it this way: if you care so much about the here and now now, imagine how much you will care about it then. For eternity. One day, if Christianity is true (or another worldview), you will regret not caring. Immensely. Painfully. And your family and friends will regret you not caring too. Forever.

We can’t simply rely on the objections of others to provide us with a reasonable excuse not to seek out the truth ourselves. We can’t make the mistake of saying things like “I believe in science, so I don’t believe in God,” simply placing our faith in the beliefs of others without investigating for ourselves. We can’t say things like “I don’t like the idea of hell, so I can’t believe in that,” simply placing our faith in what we want to believe without investigating for ourselves. We should care enough about ourselves and our loved ones to think about God a little bit, to do some reading, to ask some genuine questions. If there were only a 1% chance that there is a supernatural Creator of the universe, that the Bible is reliable and true, that Jesus really resurrected from the dead – if there is only a 1% chance that any of these things and more are true, it affects you. You can’t change that. You can’t decide that. All you can do is figure it out and do something about what you discover.

Just throwing it out there: if Christianity is true, then the only thing holding you back from eternal life, complete forgiveness of all of your wrong choices, a personal relationship with God, and experiencing the purpose of your life is believing that Jesus died for you to give you all of that. I personally think it’s worth figuring out if that’s all I’m missing.

My friend from Mount Royal University eventually did agree to have a conversation with me. We sat down with him and had a great discussion about evil and suffering in the world, morality, and yes, God. And at the end, he thanked us for a great conversation. Who could you start a conversation with about God today?

Well, don’t just sit there. Are you going to do something about it? 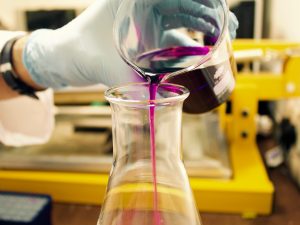 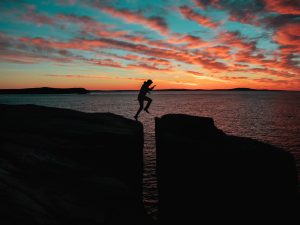