I still remember feeling the air being sucked out of our living room when my dad told me and my siblings that our grandfather had passed away. I remember retreating to my bedroom, stunned into silence, collapsing on my bed, and trying to sleep that awful dream away. He was the first person I knew, with whom I had a relationship, to die. That was six years ago. Up until that point in my life, I had a naive optimism about the world around me, an optimism of innocent laughter and almost immediate healings. My world shifted that summer.

This summer, my world shifted again.

When I first heard the news of George Floyd’s murder, the air in my bedroom went still. I felt nothing. I felt numb. I wasn’t in denial over his death and its cause, like I first had been with my grandfather’s. I was fully aware of the fact that Floyd, a forty-six-year old Black father, had been perceived as a dangerous threat because of his race. I was fully aware that it was this prejudice, this racism, that had caused a White police officer to take the law into his hands and unjustly end Floyd’s life. I was not aware, however, of the impact that this event would have on my life. Unfortunately, violent crimes and hateful injustices of this nature did not shock me. Much like most of my Black brothers and sisters, the concepts of racism and police brutality are not foreign.

Growing up Black in a White world

I’ve been surrounded by thoughts of racism and prejudice long before I was able to pronounce those words. My family immigrated from Nigeria before my second birthday, and we lived in Europe first, before finally moving to Canada at the start of my Grade 8 year. I’ve spent almost  my whole life living as a visible minority in a White majority culture.

One of my earliest memories of racism occurred in kindergarten, when the colour of my skin was compared to the brown final result of the human digestion process. They called me poop. It was that year that I developed a hatred for my thick curly Black hair, after my mother’s best attempts to secure my mane were ridiculed by other five-year-old White children. It was that year that I also learned to hold my Nigerian name close to my chest, instead of volunteering it authentically, with ease and a smile.

Although these encounters were more than damaging to my self-esteem and left deep wounds on my mental and emotional wellbeing, it wasn’t until I moved to North America that I began to understand that racism was a sin that could damage not only the heart, but the whole body as well. I remember gathering around the living room coffee table with my family, and watching the news as Trayvon Martin, Michael Brown, and countless others were murdered because of the colour of their skin. I remember my mother looking at my older brother and fearing that his sarcastic sense of humour and tall Black frame would one day be perceived the wrong way, that other Black families would gather together in their homes and mourn his name.

I remember my mother looking at my older brother and fearing that his sarcastic sense of humour and tall Black frame would one day be perceived the wrong way, that other Black families would gather together in their homes and mourn his name.

Broken and angry over racial unrest

I wasn’t surprised by the death of George Floyd. I was surprised by people’s responses to it. I was grateful for the awareness of racism that it brought and for the difficult conversations that followed, but I also observed a deep apathy and ignorance on social media and in those I knew personally. This ignorance caused me to remember and relive the years of prejudice and racism that I had experienced, growing up Black in White communities. I became very aware that the names of Jacob Blake, George Floyd, Breonna Taylor, Elijah McClain, and Ahmaud Arbery could so easily have been replaced with mine or those of my loved ones. I think this is what broke me.

I was angry at the sheer number of people saying “I never knew”—because this Black experience is all that I knew.

A step of faith to speak up

It was this lack of knowledge that motivated me to do something constructive with my anger. It motivated me to speak up about my experiences. To speak up in conversations with my non-Black friends, and through my creative writing on social media. Up until this year, I reserved most open conversations about racism for other People of Colour. I rarely talked about ignorant comments or my deep-rooted racially-based self-esteem issues, because I didn’t (and still don’t) particularly enjoy being angry or sad. These conversations take everything out of me, and, before, I was (and I’m often still) not emotionally prepared for intellectual debates with individuals on these issues that are so close to my heart. However, now, I am deeply convinced that it is our duty as Christians, regardless of our race, to speak out against racism. There may be people in the church who may not want to listen or engage with secular and political perspectives, but if we as believers stand up in our respective spheres of influence and speak of these biblical anti-racist truths, I believe people will listen.

I am deeply convinced that it is our duty as Christians, regardless of our race, to speak out against racism.

One of my favourite phrases in Scripture is at the end of Romans 10:14: “And how can they hear without someone preaching to them?” Here Paul is talking about the importance of going out and sharing the gospel with unbelievers. We know the gospel is the solution to sin and that education is the solution to ignorance in both unbelievers and believers alike. How will people know that their comments and actions are racist and hurtful if no one tells them? How will we address and fight the issue of racism within the body of Christ if we don’t talk about it? So, I exchanged my quiet (and at times unrighteous) anger for outspoken, painfully honest stories about my experiences as a Black woman living in Canada. I didn’t sugarcoat things, I determined then and there to stop making excuses for people’s comments and actions. God showed me that telling the truth is kindness if you tell the truth with kindness. And so I did. It was and it continues to be one of the most difficult and draining tasks to which God has called me.

It is difficult, because speaking the truth often comes with opposition. However, since the truth I was speaking consists of my personal hurts and traumas and offers a very vulnerable peek into the depths of my soul, opposition was and is like a knife to my chest. I have found this kind of opposition to be incredibly difficult to shake off and incredibly difficult to forgive. I’ve found speaking out and fighting against racism to be draining, because it doesn’t necessarily prevent all people from being racist, it hasn’t stopped the influx of stories of more Black lives being taken, and it hasn’t stopped ignorant comments and posts from flooding my social media timelines.

They say the final stage of grief is acceptance, and perhaps they are correct. But I haven’t accepted the death of George Floyd, Breonna Taylor and every Black individual unjustly killed at the hands of the police. I doubt I ever will. I have accepted that there is brokenness and sin in this world, but I pray to never allow that reasoning to prevent me from advocating for justice, for calling out racism, and for striving to be more conformed to the loving and anti-racist image of Christ.

Grief is a tough teacher

Both the death of my grandfather and the death of George Floyd caused me to retreat into myself and run from well-meaning friends and all my social media platforms. But God has used both these events to teach me that if I’m going to run from everything, I should ensure that I am not running away from him too.

I will leave this as my encouragement to all of you reading, whether you’re in the throws of anger and depression over the state of our world, or you’re educating yourself and doing the hard work of evaluating your prejudices and fighting to change them––don’t run from God.

Run to him. He cares about your pain and your growth. We can’t do this without him. He is a good teacher, he is patient and it is his delight to carry your burdens always. He is more angry and grieved by the sins of our world than we could ever be. You can run from everyone once in a while if that’s what you need. You are not necessarily required to explain your grief, but don’t run away from God. Talk to him or sit in the quiet of his presence and weep at his feet. He’s the only one who won’t disappoint you, and it is only he who can heal our grief. 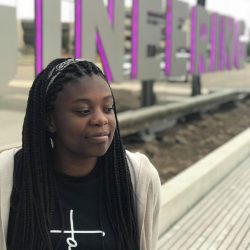 Tofunmi is in her last term of Mechanical Engineering at the University of Waterloo. She is an engineering student by day and spoken word poet by night (or whenever she has the time). She is passionate about using her art and creativity to lead both those who are near to and far from Christ to his Word and his presence.

Does the Bible speak about justice? (BibleProject video) 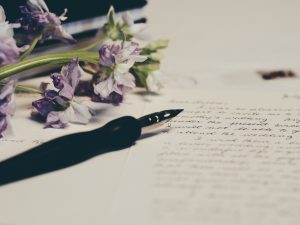 Dear love, I’m not certain about you