Our lives are shaped by how we look at the world: what we think, do, eat, say, and how we act towards ourselves and others. All of these have a huge impact on our perspective on the world. This is what is commonly referred to as our worldview, which means the way we perceive and understand the world around us. C.S. Lewis described his Christian worldview by saying “I believe in Christianity as I believe that the sun has risen: not only because I see it, but because by it I see everything else.”

The truth about belly buttons

Your worldview includes your most fundamental beliefs about the world you live in. It reflects how you view, understand, and answer life’s ultimate questions. In short, the opinions you hold flow from the worldview perspective you possess. Everyone has a worldview, whether they realize it or not, and everyone has opinions that freely flow from that worldview. Worldviews and opinions are a bit like belly buttons.

Everyone has one, but we don’t often talk about them. Or perhaps a better comparison is that your worldview opinions are like a little part of your brain stem called the medulla oblongata. The medulla oblongata regulates respiratory functions and allows you to breath. Everyone has one, we can’t live without them, but not everyone realizes that they have one and how important it is for everyday life.

The issue however, is what do our opinions look like and how do we share them with others? This starts with identifying our worldview and what opinions flow from that perspective. But at that point we need to ask a very serious question: “are my opinions shaped by truth, or is truth shaped by my opinions?” This is a subtle but super important question!

I have worked enough with people to know that there are some individuals out there who will hold to the opinion that truth is relative. Relativism is the idea that the views of what’s true, untrue, right, or wrong, is like your favourite ice cream. Saying that you believe the Christian worldview is true has no more grounding than saying chocolate is the best flavour out there. It’s a matter of personal preference; if Christianity works for you then that’s great! However, Islam works for me, and atheism works for the next guy. There can be as many “truths” as there are people who hold to them. It’s all subjective, i.e. it depends on the subject’s perspective. The problem is opinions based on relativism self destruct pretty quickly. What happens when my “truth” says your “truth” is wrong? Whose “truth” is “true?”

The myth of neutrality

We all have opinions; some are informed and others are not. However, at the end of the day they all have to submit to what is true. They have to submit to what conforms to reality and what we know to be logical. Therein  lies our task: in order to understand our worldview and the opinions that then flow from them we first need to figure out what we believe and then why we believe it? Only then can we truly understand how our worldview fits into who we are and how that shapes the opinions and perspectives we hold.

No worldview is neutral. All worldviews make overarching truth claims by which their followers need to take into consideration. For example, Christianity often gets a bad rap because of its “exclusive” opinions. Jesus did not claim to be a way, but the way (John 14:6). That doesn’t leave other worldviews off the hook. For example, Islam’s statement of faith (known as the shahada) makes the claim that, “There is no God but Allah, and Muhammad is the prophet of Allah.” This automatically excludes any group that says that Allah is not the only God, or that Muhammad was not his prophet. Atheism claims that no god exists, therefore excluding any group that says that a god (or more than one god) does in fact exist. Even the more inclusive worldviews like that of the Baha’i faith have to exclude those they consider complete exclusivists. Completing the irony: the inclusivists have to exclude the exclusivists, therefore unintentionally including themselves in the list of exclusivists. No worldview opinion holds an impartial perspective, we all have opinions based on how we view the world around us.

When you interact with other people and ask them about their opinions you may discover more about your own. Unfortunately we live in a world where far too often we have idealized the concept of “tolerance.” Tolerance however, has changed meaning in the last few decades. The word used to mean that you accepted something despite disagreeing with it. To say you “tolerated him/her” meant that you accepted that person in spite of who they were not because of who they were. Your opinion may disagree with someone else’s, but sitting down and talking over where and why your opinions disagree shows that disagreement does not always mean dissent, and that it can be done respectively. I know very few people who want to be tolerated, I know a lot who want to be respected.

For this reason we shouldn’t be afraid to discuss what we believe with others. However, the onus is on us to not only know what we believe, but why we believe it – there’s some homework involved there. Nonetheless, as a Christian I truly believe that the Christian worldview is an informed one. The opinions I hold do not exist in spite of the facts, but because of them.

Understanding what I believe and why, empowers me to not only face life’s ultimate questions, but also to face the curious questions of others. It encourages me to search for those credible answers to my curious questions and I am regularly motivated to do so because of the Christian worldview I hold. I am inspired by nothing more than the fact that I am a disciple of the Creator of the universe, and he himself has promised that, “If you hold to my teaching, you are really my disciples. Then you will know the truth, and the truth will set you free.” 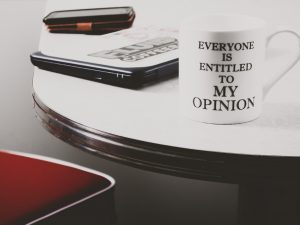